“A Model of Creativity and Innovation in Organizations”

Have you ever wondered what makes a person creative? How about the relationship between a person or individuals, and an organization in innovation? Teresa M. Amabile, the author of a research paper, “A Model of Creativity and Innovation in Organizations,” has conducted multiple experiments to address the aforementioned questions.

The experiments were carried out in the interview format where participants were asked to describe two events from their work experience: one that embodied high creativity and the other that embodied low creativity.

The author hopes that the study not only promotes further research in the direction of greatest needs for information but also functions as the guiding principle that nurtures imaginative practices for both individuals and organizations.

As one of the biggest components of organizations, individuals conglomerate into one body, driving and deciding how the company culture will be. As a result, what qualities make each person can essentially shape how the organization operates. Hence when interviewees were asked to describe personal traits that either promote or obstruct novelty, the following were the commonly mentioned characters in the order of most frequently mentioned to the least:

In contrast, the following were the commonly mentioned natures of individuals that inhibit originality in the order of most frequently mentioned to the least:

All of these factors can be put into three categories that create the componential model of individual creativity: domain-relevant skills (factual, technical, and special knowledge in the realm of the question and the problem), creativity-relevant skills (inventing and trying new approaches to problems), and intrinsic task motivation (an individual’s attitude to taking on a task whether it be positive or negative).

Although they all operate at different levels of specificity from creativity-relevant skills operating at the most general level to intrinsic motivation to intrinsic task motivation functioning at the most specific level, each component is necessary for some level of innovation to be produced; the higher the level of each of the three component is, the higher the overall quality and the level of novelty would be. When they are all put into one pathway, as shown in Figure 1, they create a map of how individuals build creative solutions to complex questions and problems. 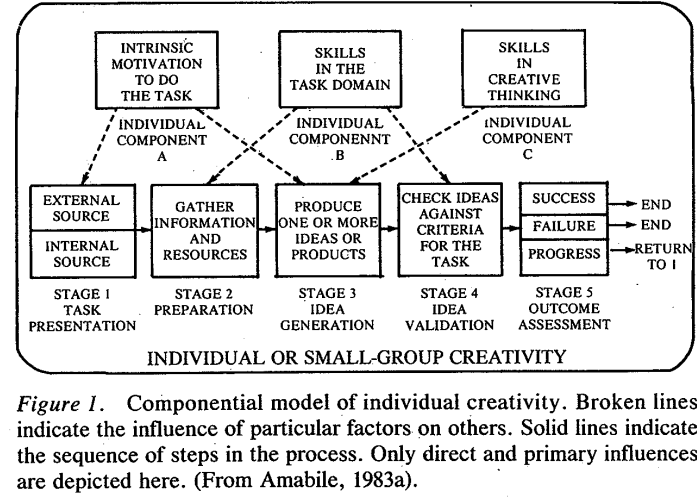 Depending on the outcome of a cycle after stage 5, how a person delivered the result by using ingenuity can directly influence task motivation and indirectly affect domain-relevant and creativity-relevant skills. Regarding task motivation, the more successful the output of a cycle is, the more motivated an individual will undertake similar but not the exactly same task in the future.

However, people will be most creative when they are primarily motivated to resolve issues by pure, internal interest, enjoyment, satisfaction, and challenge of the work itself. The reason is that an intrinsically motivated individual will be more likely to spend cognitive energy in trying out new ways to solve problems.

Switching gears, it’s important to note that an individual’s novelty can be influenced by outer constraints coming from organizations at where the individual works.

The followings were the environmental factors that were depicted by interviewees to promote newness:

Whereas the followings were the environmental characters portrayed by the interviewees to impede originality:

In order for an organization to remedy its shortcomings and be successful in formulating a place where employees can be as creative as they want, all levels of management should be involved in the process. The highest level of management should set the overall organizational climate where creating novel ideas and products are encouraged. The middle levels of management and project management should establish and communicate project goals and timeframes, provide feedback, and set levels of freedom and constraints. Co-workers can influence one another by demonstrating varying levels of expertise, technical expertise, and social skills. Everything considered, Figure 2 shows the componential model of organizational innovation that displays the interaction between individuals and organizations: how they interact with each other and the sequences of steps.

It is not uncommon for people to fail when they approach a problem with a mundane, standardized solution, which is where the need for originality steps in. However, ingenuity is not limited to its usage in solving problems. It is also used to drive innovations and introduce novel products and ideas into the world. Given the gravity of how pertinent creativity is for both individuals and organizations, the paper addressed factors that drive innovation within individuals and organizations. To sum up, creativity is the highest when all of resources, techniques, and motivation overlap. I urge you to reflect on and analyze how you and your organization have been in the past. The key to success is handed over to you. Now, it’s a matter of how you use it to open the door that leads to the next step.

Fit for Disruption: A talk with Matthew Webber

The Road to Pixar

An Interview with Michael Gough, VP of Product Design at Uber.